Watercolor Classes, Workshops and Paintings. Projects and articles available to painters of watercolor. 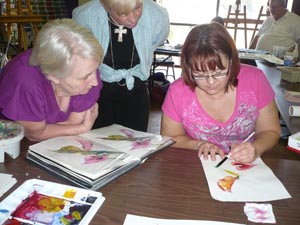 Valerie comes from an artistic family. Her father, Edward Toliver, was a prominent photographer
for Salt River Project before he retired, and has had his black and white photos
in Arizona Highway magazines during the 1960s.
Her mother, Sheila Sanders, was a self-employed architect
before she retired and still dabbles in art to this day.

If you google "Jerimiah Theus", you will read about one of Valerie's ancestors.
Jerimiah was an early American Artist for over 30 years in Georgia, during the 1700s.
As you can see, Ms. Toliver's talent comes to her naturally!

Valerie is a purist - only devoting her artistic efforts in watercolor painting.
Her distinctive style is easily recognizable. Her work demonstrates great versatility
of mood with an exotic command of color. But her true love is teaching.
If your painting looks flat, she shows you how to give it depth.
If you find your painting lacks color,
she shows you how to mix the right amount of paint
and water to give it the vivid color it needs.

Ms.Toliver's abilities in composition and design come from various drafting professions
- including architectural, mechanical and electronic design.
She left the corporate world in 1999 and is currently edging her way into
the world of fine art by creating paintings that are unusually dramatic for watercolor.

Valerie has been teaching around the valley since 2004.
She teaches at the Arizona Alliance Gallery, Jerry's Artarama, Hobby Lobby
and at her studio in Central Phoenix.

In 2011, she dedicated her time to teaching seven classes a week, two to four workshops a month
in which 1273 seats were filled with students that found her instruction to be quite helpful and motivating.
Currently, she is teaching 3 to 4 classes a week so she can enjoy a less stressful life and work on publishing projects
and hopefully, a watercolor instruction book!

In September, 2010, Valerie was a guest artist at the "Artists of the Rim" Gallery in Payson, Arizona.

Her work was also displayed at West Valley National Bank in September 2009.

She won three awards (1st, 2nd and 4th) at the Arizona State Fair in 2007
and has won an award at the State Fair every year since then.

PCC also displayed over 40 pieces of her work during November 2005 in their Fine Art Gallery.

You don't want to miss her enthusiastic presentation as she offers intriguing quips
that help students remember watercolor procedures!